So abviously I love to read..I own a blog for about a year and I love sharing my thoughts on the books I've read.
Tweet I'm really getting into this story now :) 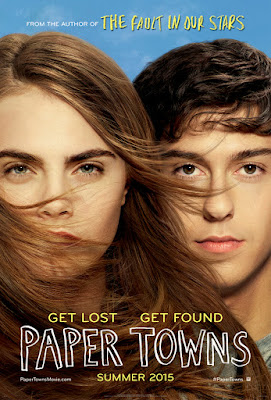 Synopsis
Who is the real Margo?

Quentin Jacobsen has spent a lifetime loving the magnificently adventurous Margo Roth Spiegelman from afar. So when she cracks open a window and climbs into his life—dressed like a ninja and summoning him for an ingenious campaign of revenge—he follows. After their all-nighter ends, and a new day breaks, Q arrives at school to discover that Margo, always an enigma, has now become a mystery. But Q soon learns that there are clues—and they're for him. Urged down a disconnected path, the closer he gets, the less Q sees the girl he thought he knew...

I'm very excited to start reading Paper Towns, it will be my second book by John Green. The Fault In Our Stars was an exceptional read, so special. I liked the writing in TFIOS and I'm curious to see how John Green wrote this story. I'm planning on buying the entire box set of John Green, but first I wanted to try one more book to be sure.

So I was happy to discover I still like the writing style. It isn't very difficult to like the main character, Quentin. He's an average high school senior. He is described very realistically. Quentin has always admired Margo. She's such an awesome and interesting person to him.

The book evolves around this mystery of Margo's disappearance and Quentin's journey to try to find her and also discover the real Margo. During the book Quentin is wondering if his view of Margo is accurate. Does he know the real Margo like he thought he did?

Quentin's has two great friends. Ben is absolutely hilarious, such a great character. I liked reading the developments around his friends.

It's interesting to see the story develop and witness Quentin's change in perspective. I don't wanna spoil anything, but I especially loved the ending. It made the book even more realistic.

The book has portrayed a great message. Quentin realizes that everyone is also just a person. I love the following quote:

“What a treacherous thing to believe that a person is more than a person.”

And it is, treacherous to believe that. Great quote and great realization too.

I thought it was a very interesting book. Very different than TFIOS, but it still got me thinking, just like TFIOS did. This book stays with you for a while and you will think of this story now and then. I love when that happens, when a book really sticks with you.

I liked it a lot, it was a fast and interesting read.
After reading this I definitely wanna read the other John Green books. If you have a John Green book to recommend, let me know!

Have a great day,
~Myra~ St. Vladimir’s Academy isn’t just any boarding school—it’s a hidden place where vampires are educated in the ways of magic and half-human teens train to protect them. Rose Hathaway is a Dhampir, a bodyguard for her best friend Lissa, a Moroi Vampire Princess. They’ve been on the run, but now they’re being dragged back to St. Vladimir’s—the very place where they’re most in danger...

Rose and Lissa become enmeshed in forbidden romance, the Academy’s ruthless social scene, and unspeakable nighttime rituals. But they must be careful lest the Strigoi—the world’s fiercest and most dangerous vampires—make Lissa one of them forever.

My expectations are pretty high for this series because I heard so many good things about it. A lot of booklovers are calling this the best vampire series (and there are a lot of them). I would like to be drawn inside the story really fast and like to see some good world building along the way.

Within the first 40 pages or so I was already drawn into this world Richelle Mead created. I truly loved the world building in this book. I think it's amazing when a writer can portray a world the reader can imagine and see in front of them. If you can do that, the story is already good.

- I immediately liked the main character Rose. She's fierce, full of confidence and not afraid. I liked her humorous ways.

- This isn't a story were the main character doesn't know that vampires exist or anything like that, and I did like the fact that she new this world already. This aspect made it very different from other vampire related stories I've read.

- I like the realness of the characters. Richelle made most of them really easy to relate to and understand their emotions.

- The friendship of Rose and Lissa is discribed very relatable and real (exept for the fact that she can look inside her head from time to time).

- Dimitri is a very interesting character... I would like to get to know him better in the next book!

Because I liked a lot of things in this book, I'll give it five stars out of five!!